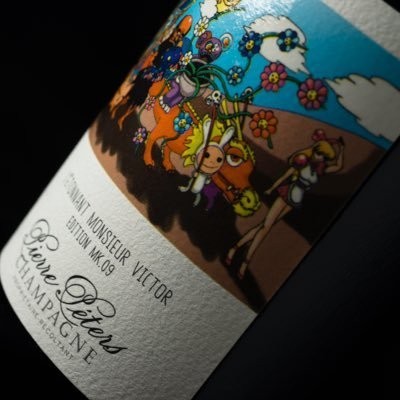 E-Mail
P Secure bonuspoints now
Description Evaluations 0
Description
Champagne Pierre Péters is, most of all, the continuing story of a family over time. As the... more
Close menu

Champagne Pierre Péters is, most of all, the continuing story of a family over time. As the sixth generation to tend to the domaine, the idea of expanding and enriching our family history is one that has always been close to our hearts.

The Cuvée “L’Étonnant Monsieur Victor” (“The surprising Mister Victor”) refers to our son, Victor, who from a very young age has been passionate about art and painting. An enthusiastic artist, he completed a project for school in which he was to interpret a well-known painting in the manner of a different artist. He chose to parody the Japanese neo-pop artist and painter Takashi Murakami and to re-visit a 19th Century biblical painting that he discovered at the Musée d’orsay, “Caïn Fleeing with his Family” by Fernand Cormon. Conserving the principal line of the work, he, on the other hand, replaced the anatomical exactitude and the earth tone colors chosen by Cormon with Manga graphics and Pop Art style vivid and acid colors.

Encouraged by the result, we asked Victor to choose and create several more Murakami-inspired works while we reflected upon the elaboration of a new cuvée to be based on a blend of carefully selected vats from our Perpetual reserve and Vins Clairs. Aged on a natural cork from the time of bottling, we allow this Champagne the time to mature for more than 5 years in our cellars before disgorgement.
We now have the wine, the name, and most importantly, the “surprising” artistic material to launch a veritable collector series!

The MK series is the first of a new Collector cuvée which will have 6 different editions to be launched between 2016 and 2022 under the names MK.09, MK.10, MK.11, MK.12, MK.13, MK.14, in reference to the parodied artist and the corresponding base year of the Champagne’s blend.

Rating: ***
The second release of Péters’s extraordinary new multi-vintage cuvée—also featuring a Takashi Murakami-inspired label by Victor Péters—is, if anything, even more elegant and refined than the first, showing layered, complex aromas and a marvelous completeness and dimension of flavor. Like the 2010 Les Chétillons, it demonstrates a density and grip that’s unexpected for the vintage, although of course here it’s also a result of the presence of reserve wine from Péters’s perpetual cuvée, which accounts for 50 percent of the blend. Perhaps the most impressive element is the finish, which expands with kaleidoscopic presence and outstanding length, exhibiting a rare subtlety and detail.

Rating: ***
This is the debut release of this cuvée, named for Rodolphe Péters’s son Victor (who also created the artwork for the striking label, made in homage to the artist Takashi Murakami). It’s a blend of 50 percent Les Chétillons from 2009 and 50 percent of the estate’s perpetual reserve that was created in 1988: the same one used to make the Réserve Oubliée. It combines the finest qualities of each—the brothy, brown butter complexity of the perpetual cuvée and the laser-like, chalk-driven intensity of Les Chétillons—yet the two together create an expression that’s entirely new, with a vibrant personality and subtle, painstaking detail. It’s a gorgeous wine, and one that should only increase in complexity with further aging.