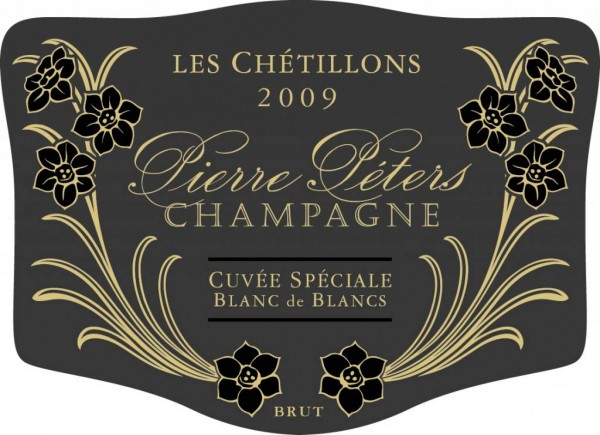 
Peter Liem:
At the top of Péters’s range is the Cuvée Spéciale, one of the great single-vineyard champagnes of the Côte des Blancs. This is a vintage-dated blanc de blancs that comes from Peters’s three small parcels in the vineyard of Les Chétillons, one of the most highly-regarded sites in Le Mesnil-sur-Oger: the vines in the oldest plot of 80 ares are 68 years old, another has 45-year old vines and the youngest parcel is 35 years old. The Cuvée Spéciale has been pure Chétillons ever since it was created in 1971, and at that time, it was in fact sold as a Spécial Club wine. François Péters left the Club in 1981, and the 1982 Cuvée Spéciale was the first to be put into the distinctive, slope-shouldered bottle that is still used today. The 2000 is the first vintage of Cuvée Spéciale to state the name of the vineyard on the label, but as the 2001 was released prior to the 2000, that was actually the first vintage to reveal the new label in the marketplace. Cuvée Spéciale is always a sterner, more rigid wine than the others in the range, partly because it's pure Mesnil, from a very chalky parcel, whereas the other wines are blended. It emphasizes its minerality although not exclusively so, as the old vines in Chétillons give highly concentrated fruit flavors that consistently show a confident richness and ample depth. While it's a wine that requires some age to show its best, it's not always as backwards as you might expect for a pure Le Mesnil, and I tend to feel that it starts showing at its best around ten years of age: the 1995 and 1997, for example, seem to be at their peak now, having developed a rich, mature complexity.