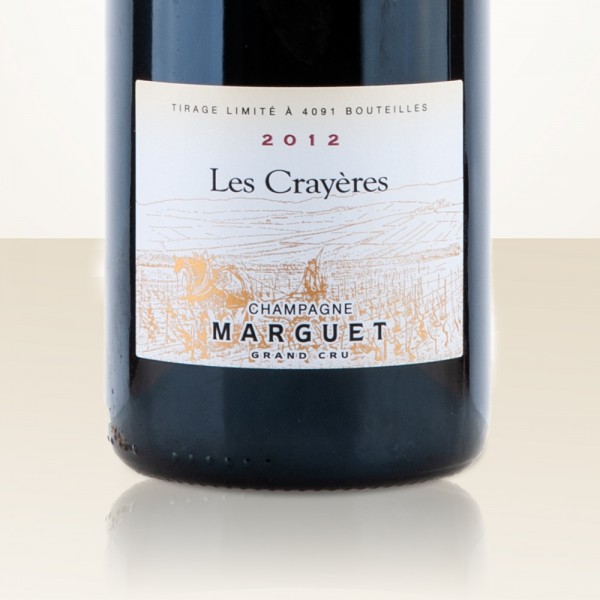 Les Crayères was Benoit Marguet's first single-layer champagne and was first launched in 2008. Located one escalation level above the Ambonnay, it grew without exception in the Lieu dit of the same name in Ambonnay. Fermented in wood, like all Marguet's wines, it went through malolactic fermentation. This year a proportionally higher batch of newer barrels (two to five years) was used.

Since 2010 the plants have been plowed manually with the horse. It works with minimal intervention, without pumps and with little to no use of sulfur.

Nose: citrus oil, the whiteness of lemon, wet chalk and cold river pebbles, oyster shells and lime zest along with grapefruit and Passe Pierre algae. This initially unusual conglomerate outlines the peculiar and multi-layered nose of 2015 Les Crayères, which Benoit Marguet produces in a very small edition. It oscillates between citrus and saline aromas and, thanks to the long yeast storage, is blessed with the scent of fluffy yeast wake men and a gentle bass on tap.

Mouth: In the initial taste with elegant, fine-pearly mousseux that literally lets the 2015 Les Crayères sparkle on the palate. The autolysis notes of yeast pastries and brioche are nutty underlaid with delicately salted hazelnuts and chalky minerality, which gives it its distinctive grip. With sublime depth and high internal tension, it builds up gentle pressure on the palate and shows its aristocratic side from the entire habitus. Perfectly shaped without small talk, instead with attitude and format. In the aftertaste with distinctive fruit and saline finish, it calls for appropriate cuisine at eye level.

- Baked rabbit with orange and fennel in saffron