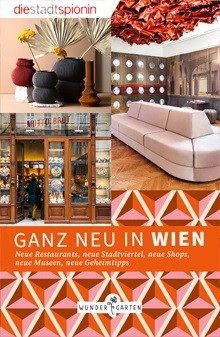 Typically Vienna: After two years of standstill due to the pandemic, the city is reinventing itself. From culture to enjoyment, from hotels to nightlife, one new opening follows the next. Several new museums such as the Horten Collection or the modern Albertina inspire with art, new markets and temples of pleasure such as "A World of Delicious Food" attract gourmets and real Grätzl life is developing in the new districts. It is no longer surprising that there are also plenty of new restaurants, shops and bars (including a secret speakeasy bar). As always, the StadtSpionin has her nose in the wind and collects well over 100 new openings in her new book.
The journalist and Vienna expert Sabine Maier, who is behind the StadtSpionin, is always concerned with quality - packaged in charming language.
If you want to know how lively Vienna feels after Corona, you can't avoid this book!